Hello beautiful people,
It is currently 27 degrees Celsius and so you can imagine I don’t particularly want to be stuck in a chapel emailing, so I’m going to make this one short.

It was my year mark, so I needed to do something that would make me happy and therefore I decided on phone calls. Firstly, I texted Elder LeSueur who said that he would be burning a shirt. Then, I received permission to call Sister Clawson who had celebrated yesterday with a member and a fire pit. After, I called Elder Santa Maria who has been on a health fast all week but would be treating him and his companion to a KFC bucket. Next, I needed to call Sister Taumalolo in regards to a reminder on our area book, so it was missionary purpose. Therefore, I asked the Assistant to the President, Elder Ellis if I could contact her. He agreed and provided the phone number. I called it twice, however, there was no answer. Anyway, the number called back and it was my MTC companion Sister Thompson ! Elder Ellis confused the areas of Wigan and Warrington. The only thing they have in common is the first letter. Bless. An AP’s mistake turned out to be my tender mercy.

Apart from the above, I didn’t do anything special to celebrate as it was very much a busy day Unfortunately, I wasn’t able to execute my idea of boat contacting on the canal instead of bus contacting. But for the most part, it was a good day.Additionally, this week I was able to go to Runcorn for exchanges with Sister Suzarte and my previous companion of four days, Sister Estamante. I know, you probably have no idea where it is, and I don’t blame you, but in the mission, it is very much known. The exchange with Sister Suzarte went well. She is an amazing missionary and I learned a lot. Her approach with people is very much centred on Christ, and you can feel her sincerity when she speaks and testifies. I hope to apply that to my approach, to have that love, but to have a greater focus on my purpose. She is very organised and I like how they are working through the ward directory and meeting with less actives, and part-member families. Additionally, I shared how I feel as though my reputation has been set and it’s too late for any alterations. Sister Suzarte stated that it wasn’t too late but that I still have time to make the changes that I would like to make. In fact, it made me think about the Atonement of Jesus Christ. I recognised my lack of faith, but also, lack of understanding. It is never too late, there is no expiry date on change, and that I need to remember to look up to Christ and not around. She is a great Sister Training Leader !

“God will take you as you are at this very moment and begin to work with you. All you need is a willing heart, a desire to believe, and trust in the Lord.”
—Dieter F. Uchtdorf, “It Works Wonderfully!”, Ensign, November 2015

Doctrine & Covenants 68:6 Wherefore, be of good cheer, and do not fear, for I the Lord am with you, and will stand by you.

Have a wonderful week ! 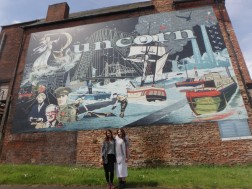